Okay everybody…I know this is what you have been waiting for….the garage!

Ah…But it is not an ordinary garage – it is a true carriage house.  I think it is at least as old as the actual cottage.

And that makes it very wonderful in my book.

I have determined from old pictures that it was originally located further east on the grounds of the old camp. Back in the day, buildings were moved around quite often.  I actually have just discovered that there was originally a different building where the cottage is now…more on that later!

So….a little history first… and then I promise to get back to the carriage house…

Back in the 1890’s, in the early days of Gearhart Park, there were no asphalt, cement or even gravel roads.  As you can imagine, roads would have been a sandy, mucky mess most of the time – except that they were not. People used what they had back then and what they had was a lot of timber. 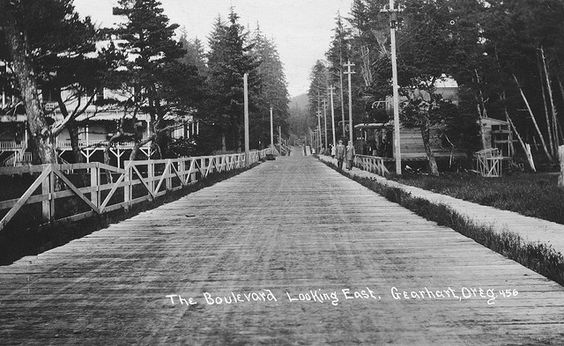 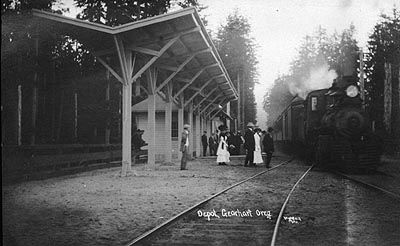 The train would arrive at Gearhart Station, up near where Hwy 101 is now, from Portland and points beyond up the Columbia Gorge.  People would walk or take a carriage and a horse drawn wagon would carry the luggage to the Gearhart Park Hotel and to the cottages located on these roads.   Even when motorcars start showing up on the coast they were still driving on the plank roads of Gearhart. There are pictures taken into the late 1920’s showing these roads still in use.

So what does this have to do with the carriage house?

The carriage house floor is made of these same wooden planks and they are amazingly solid.

The walls are also made of thick planks covered in cedar shingles.

Several of the windows are original and are the old rope and pulley style.

The man door is a Dutch door – how fun is that?

They also added the stadium seating deck – so you can sit out there on a summer evening and watch the ball game under the lights!

Well…enough history….so now what are we going to do with this great old building?

The doors were really built for narrower vehicles than ours although we do have a great old Bronco beach buggy in the family that would fit nicely.

We would like to put in a bathroom on the ground floor level.

We have some great ideas for that big upstairs space as well.

This is all to come….

But in the meantime….it will be the party garage!

2 thoughts on “The Carriage House”